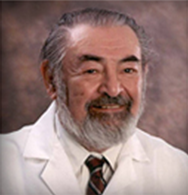 Our founder, Dr. Fredric Rieders, was born in Vienna and immigrated by himself to the United States at the early age of 16 after escaping the atrocities that faced Central Europe in the 1940s. His desire to help the disadvantaged came partly from his early experiences in America where, as a recent immigrant, he worked and lived with those who struggled to survive in this prosperous society. After serving his new country during World War II, Dr. Rieders came back to the United States to complete his education. He embarked on a scientific career that spanned more than five decades and led him to become a world-renowned forensic toxicologist.

Early on in his career when he worked as the City of Philadelphia’s Chief Toxicologist, Dr. Rieders researched such mysterious topics as Sudden Infant Death Syndrome (SIDS), Legionnaire’s Disease and heavy metal poisoning. During this time, he was also Professor of Pharmacology and Toxicology at Thomas Jefferson University where he taught Medical and Graduate students.

Through the years, Dr. Rieders conducted sophisticated laboratory tests and provided expert testimony in a variety of high profile cases including the case of the serial killer of helpless hospital patients; Dr. Michael Swango, for which Dr. Rieders received a Bronze Eagle from the Department of Veterans Affairs; the Libby Zion case that led to legislation affecting hospital care; the rat poison murder of Robert Curly by his wife and the O.J. Simpson trial.

Dr. Rieders love of science and teaching led him to pursue a variety of philanthropic interests. Most notably, he established the non-profit Forensic Sciences Mentoring Institute, a hands-on research and academic instruction organization designed to support scientific and humanitarian activities serving students of all ages but specifically the young and especially the disadvantaged.

Dr. Rieders career took him to the private sector where he worked for a number of years and eventually started his own company, National Medical Services, now known as NMS Labs. Over the years, NMS Labs has been setting the standards for excellence in clinical toxicology and forensic testing – responding to the needs of healthcare providers, medical researchers, coroners and the criminal justice system with well over 2,500 state-of-the-art tests. Now 45 years later, NMS Labs remains a family owned and managed company that provides scientific results in the pursuit of truth.